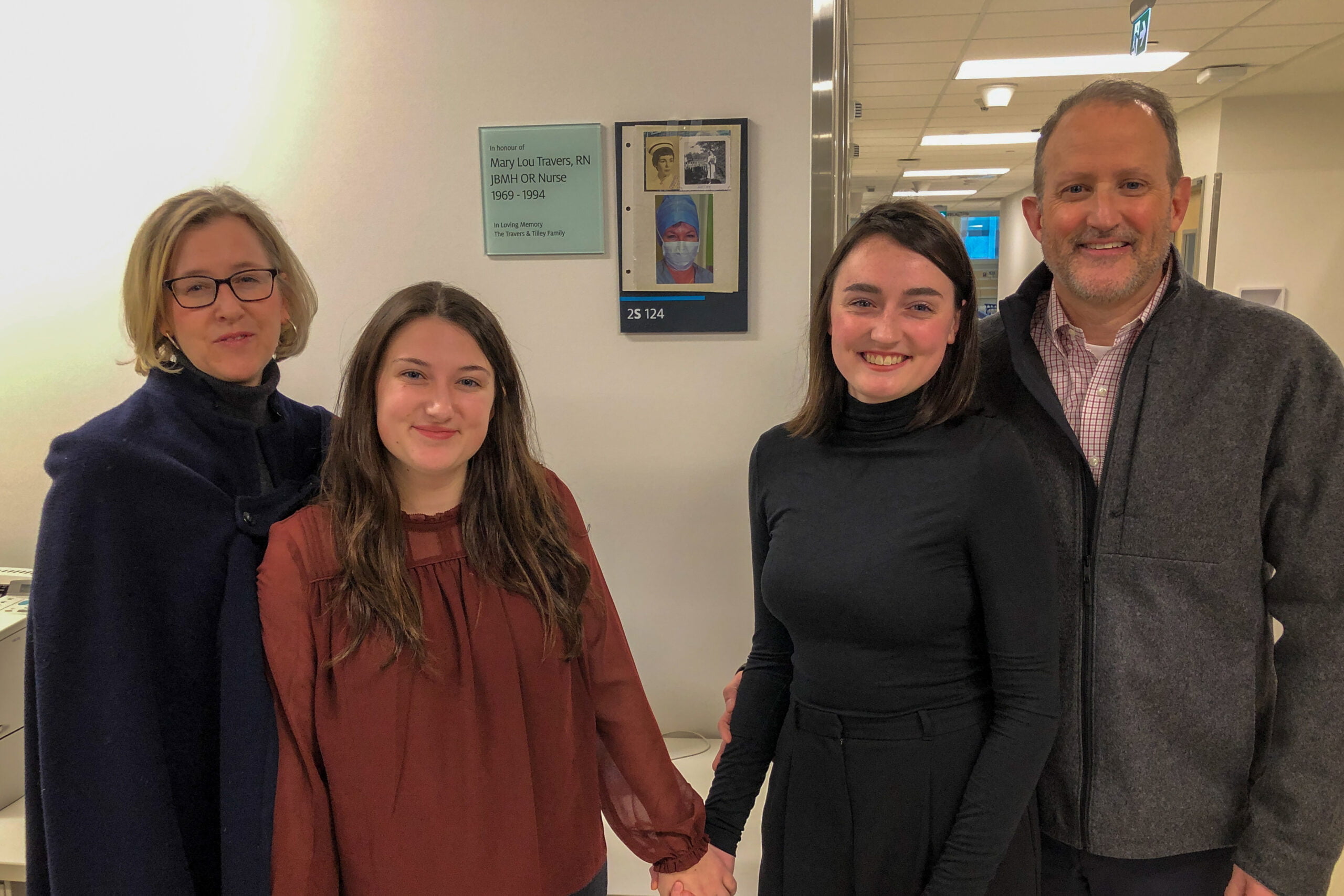 “We’d be crazy not to renew our pledge.  We’ve been involved in the hospital through our own experience but also through family and circumstances.  Not only is the hospital an important part of our community, it also holds a lot of meaning for both of us personally,” says Kirk.

Having recently moved to the Burlington community in 1967, Jane’s mother Mary Lou Travers spent 25 years, from 1969 to 1994, as an Operating Room (OR) Nurse at JBH.

“My mother was a remarkable ambassador for the hospital as a care giver, surgical team member and peer.  She impacted many people with her care, and this included patients, doctors, nurses, and support staff.  She wanted the patients from the community to have the best possible experience, and it was important to her to be supportive of her peers as well,” says Jane.

Unfortunately, Mary Lou passed away when she was 56 years old from an aneurysm.  “When my mother passed, I remember people in my community, especially colleagues and former patients, sharing stories about her and how much she touched the lives of so many,” says Jane.  “My mother loved the hospital and was proud of how it helped those in her community.  It meant so much to her.”

Jane wanted to honour Mary Lou by supporting JBH and leave a legacy at a place that holds special meaning to her and the Travers family.  Kirk, like Jane, wanted to support the hospital in some capacity as a result of care he received.

Over 30 years ago, as he and Jane were preparing for their wedding, Kirk found himself not feeling well, and no one could seem to figure out what was wrong.  Mary Lou wanted him to see one of the doctors at Joe Brant.  A short time later, Kirk was admitted to the hospital and met with Dr. Sydney Gee.

“She was unbelievable.  She knew something was wrong and instructed for multiple tests to be run – that day.  She and all the doctors wanted to get to the bottom of it,” recalls Kirk.

“None of the test were conclusive, even the biopsies were coming back normal. Another biopsy was set up to be done in the OR and they did not give up until they found what they were looking for.  Coming out of the surgery, the mystery was solved.  I had, at the time, a rare form of non-Hodgkin’s lymphoma.”

Kirk spent 8 months in the oncology clinic and was taken aback by the incredible care he received.

“The culture of the hospital was and still is incredible.  Everyone involved ensured that I was cared for, I can’t speak enough for how compassionate each and every staff member was,” remembers Kirk.

Today, Jane and Kirk continue to have high hopes for JBH and want to see the hospital continue to sustain its compassionate and caring culture.

“JBH is a landmark here in Burlington.  It’s something that is there for the community, and it’s important that in anyone’s time of need, they have a place to go to.  I hope hospital’s longevity keeps going and provides a warm and welcoming space for their staff and community,” says Kirk.

“How fortunate are we to have a hospital in Burlington that continues to build it’s legacy through incredible expertise, compassionate care, utilizing advanced technology, and always looking to the future, and it is right here in the heart of our community and available to all of us,” says Jane.