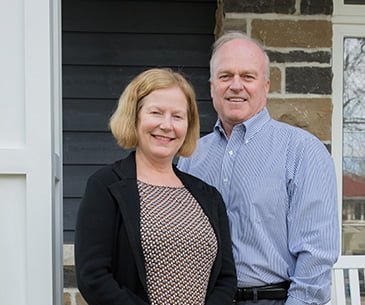 When Jim Suske’s company was purchased by Royal Bank, Jim and his wife Bev Livingston could have moved anywhere in Southwestern Ontario for his new role with RBC.

The couple had been living in Calgary, and were looking for a new community to call home, and had a few wish list items including proximity to the lake, easy access to Toronto, and a walkable city.

In the end, they chose Burlington and are glad they did.

“We love Burlington because it feels like a small town community, with top quality restaurants, and everything we need is within walking distance,” said Jim.

Being new to the area, the couple reached out to the Hospital Foundation for a tour of the Hospital. They were long-time supporters of the Hospital in Bev’s hometown of Barrie, and understand the role that Hospitals play in a community.

“I had a tour of the Hospital in Calgary, and thought it was a good way to get to know our new community,” said Bev. “We are all going to need the Hospital at some point in our lives, so we should support the Hospital in the community we live in.”

For Bev, that time came sooner than she was hoping as she broke her foot playing badminton. She was extremely grateful for the care she received both in the emergency department, and ongoing with the fracture clinic and is pleased to able to be walking more again.

In addition making a donation to the Foundation, Jim volunteers on the executive committee for the CAAAR! 3 on 3 Road Hockey Tournament.

“The number one reason I got involved was that I`ve always been interested in philanthropy,” said Jim. “And I have a connection to hockey, as I played when I was younger and so did my son.”

In the end, Jim and Bev believe that supporting the Hospital is an investment in their own future.

“We all need the Hospital,” said Bev. “The Hospital is going to be there for all of us.”