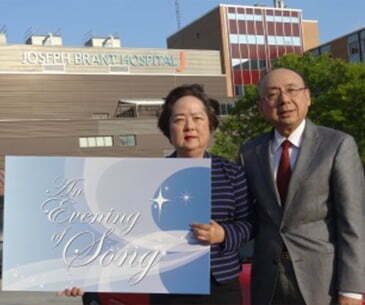 An Evening of Song

For Dr. Chiu and his wife Katherine, their son Stephen’s passion for singing was their inspiration for an event in support of the Foundation. The Chiu’s hosted An Evening of Song at the Burlington Performing Arts Centre in October 2014.

“I was so happy to get a chance to see him perform in tha setting,” said Dr. Chiu. “He really showed he’s a performer.”

The evening saw over 440 people come out, raising more than $20,000 for the Foundation. And while it was a lot of effort personally for Dr. Chiu, he was able to fulfill his lifelong dream of seeing his son perform.

Dr. Chiu proudly displays a story about the event, and photos of his son on stage in his medical office on Guelph Line, but it was the feedback from those who attended which make him the most proud.

“Months later, I was approached in the parking lot of the bank, and someone told me they attended the event and wanted to say thank you, and tell me how impressed they were,” he said. “It made my day to hear that.”

For Dr. Chiu, supporting Joseph Brant Hospital was an easy decision, and a family affair and he encourages others to think about how they can support our local Hospital.

“We were quite happy to give a hand and help out to some degree,” he said. “It all starts with the thought ‘Maybe I can do something – it doesn’t have to be a big thing.”

For videos from An Evening of Song, visit: https://www.youtube.com/user/lovetosingforfun/videos